A Spirituality blog from our Community

The Expulsion from Paradise 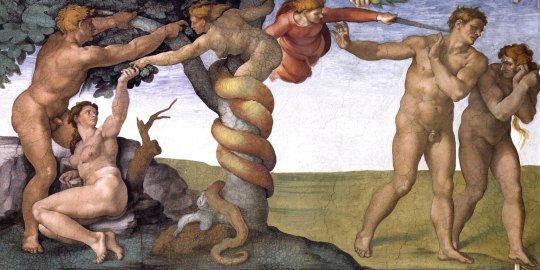 Michelangelo's The Expulsion of Adam and Eve

This was our second session discussing the spiritual sense of Old Testament Scripture. In the first half we talked about definitions of myth and in the second we discussed Genesis chapter 3, the story which many Christians have called the ‘Fall of Man’. Interestingly Jews do not regard this as the Fall, but as only one of eight consecutive stories that together constitute the Fall.

Bearing in mind that this is a symbolic myth, we asked ‘how does it explain the unexplained (particularly the paradoxes of human existence), and what abstract ideas does it express in story form?’ I’ve put our responses under two headings, explanations of the world and explanations for religion.

1. Explanations of the World

Several features of the world are explained as having first arisen as punishments for humankind’s sinfulness.

> Is it legitimating these things or merely trying to explain why they are the way they are?

If anything it is saying that things shouldn’t be that way as they would not be like that in a perfect world.

> Why is God so worried about people being knowledgeable like him- isn’t that precisely what he wants of us by the end of the Bible?

Perhaps it means knowing specifically in one of it’s biblical senses of ‘controlling’, ‘having power over’? (Of course normally the biblical sense of ‘know’ is ‘to have intercourse with’.)

The problem is with pride in the sense of wanting to be God, to have God’s power, rather than wanting literally to be like God.

We went onto note that that the story in no way implies that Eve was more to blame than was Adam, although St. Paul seems to imply that she was- a thought which has historically been used to justify opression of women.

Finally we discussed sex/intercourse, or rather it’s complete absence from this story.  Churches have historically been so obsessed with sexual conduct that it seems that sex has often been projected onto the story when it isn’t there at all. Neither is there any form (sexual or non-sexual) of the ‘imputed blame’ kind of explication of the doctrine of Original Sin.

View the Next Part of Bible For Bluffers.

Comments on: "The Expulsion from Paradise" (2)

What are your thoughts? Cancel reply